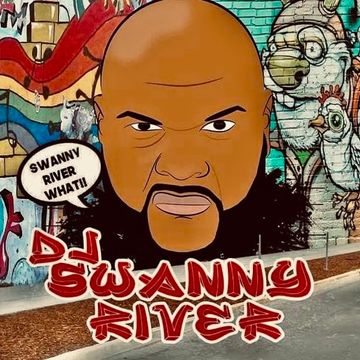 Swanny River is a no-nonsense deejay and producer from Brooklyn, New York with an extensive list of credits and a discography that dates back to 1989. His fiery passion for hip-hop is shown in his unrelenting desire to constantly raise the bar and show his skills behind the boards. It’s fueled his staying power, making him a beacon for generations of artists eager to feed from his fervent energy.
Mix-tapes is one of River’s many specialties but he is a very multi-faceted individual who also hosts the Weekly Mixtape Radio Show Rollin With Swanny & A House Music Set Called House Music Saturdays (Every Friday & Saturday 10pm est) And His Own Radio Station RWS Radio On the All digital Radio Network. (www.rws.alldigitalradio.com) His presence can be seen in several music videos On Youtube youtube.com/mrswannyriver01 His Shows Are Also Replayed On mixcloud.com/swannyriver And On hearthis.at/dj-swanny-river You can Also Follw him On instagram.com/srmg_rwsradio , twitter.com/rwswanny , twitter.com/swanny_river Having a love & Respect for the culture he expanded his ear but never forgot the days of yesteryear. He entered into the world of production in 1989 and never looked back. Developing a style that is truly East Coast he is patiently awaiting his turn. His love for music began early in his teens as a DJ for neighborhood parties and events which soon graduated to the club scene. His work with several Artist in the world of Hip Hop, gave him the experience and knowledge that he uses to make every track he produces a success. River takes pride in his work and loves seeing the growth of artists during their career.