IN AT THE DEEP END
by  sickrabbit
5 months ago
0

Destination Jubilation
by  sickrabbit
5 months ago
3

Ready steady...
by  sickrabbit
7 months ago
0

Cranium Crunch
by  sickrabbit
7 months ago
1

Time Change
by  sickrabbit
8 months ago
1

#Mixed in One Go

The Armchair Astrological Navigation Suite
by  sickrabbit
one year ago
1

Increase the velocity
by  sickrabbit
one year ago
0

Sonic cannon
by  sickrabbit
one year ago
0

Farewell to Summer daze...
by  sickrabbit
one year ago
1

September psychedelia
by  sickrabbit
one year ago
0

Let the spirit fly ...
by  sickrabbit
one year ago
1

JIGGERY
by  sickrabbit
one year ago
1

SICKRABBIT Audio for the atmosphere
by  sickrabbit
one year ago
0 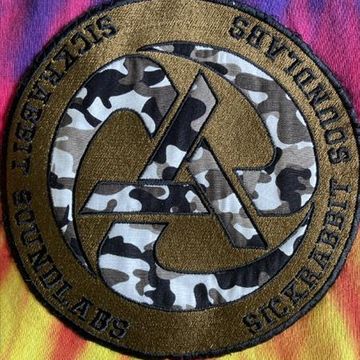 Never as a youngster in a million years did I ever think I'd be mixing dance tunes .....My love was ( still is a bit ) heavy rock / thrash metal . Seen em all from AC/DC to ZZ Top , it all changed seeing Metallica in 84 tho , then a few years later Slayer.The energy was addictive . Used to make compilation tapes for my friends . It wasn't until attending an Ozric Tentacles concert did it all change again. It was in the very early start to the 90's. Eat Static were support , I witnessed a concert crowd mutate into a full blown dance event , when Static came on. Now , prior my rock / metal days, as a kid , I was brought up on the likes of Bowie , Queen , Donna Summer 10cc , disco and then Jean Michelle jarre . I think those seeds sown as a youngster were suddenly awakened, they surpassed my love of heavy rock that night on the dance floor that night and with Eat Static had me dancing like a loon. I was hooked . I found my groove from moshing and headbanging to dancing non stop . From then on , visited all manner of hedonistic parties - Megadog . i dicovered goa / psy trance. The parties expanded, likes of Return To the source, Otherworld , Earth dance ect ect ...that worm grew . So , as I always loved making mix rock tapes I decided to try ( still trying ) mixing Goa and Psy trance - starting with a pair of Sony discman's onto an old tape deck ! The rest is history . My efforts may not be brilliant , but if at least one of my attempts at mixing catches the ear then its all good . I'm humbled to be able to be given the opportunity to try and mix and share such wonderful , energetic shamanic dance tunes and totally besotted by this genre's sound nearly 30 yrs on . Main flight deck ( spare bedroom static set up ) is made up of a pair of 1000mk 3s & a pair of Pioneer cdj 400's. a djm 800 mixer , recording MP3' ,CD's onto a Reloop 2 Mp3 recorder , no pc , I've also just started separately using a Numark Mixdesk Express ( very impressive ) or a pair of 2nd hand cdj400's & a Numark M4 mixer . I use the Mixdesk / 400's as a basic set up (at present on the kitchen - table foot injury doesnt permit standing at my main set up, - which drives the mrs mad ) again no pc or Serato , but using Mp3 sticks or cd's onto a Reloop 2 MP3 recorder. I'm amazed at the simplicity of the Reloop recorder - its an enjoyable addition to a set of basic decks. No matter what system tho , I still refuse to use any corrective programs or editing on any set up , so what you hear is totally real, mistakes included , first off mixing -RAW , what you hear is exactly as in the moment BUT thats my own choice. I just hope my efforts tickle the space between your ears . GOA / PSY TRANCE always has , and always will be my altar , my religion. However ..... I'll also remain a Slayer fan until I die . BOOMSHANKA! Love n peace - Oz - Sickrabbit