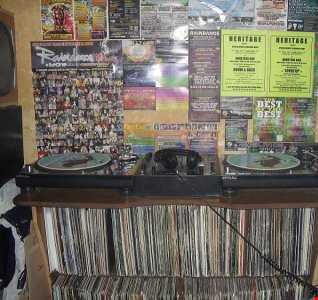 Raindance Rob DJ Mix Happy Hardcore Bouncy Techno Jungle
606 9 1 0 1h6m Friday, May 17, 2013
Sheffield - United Kingdom
my love affair with music started in 94 & i started DJing in 98. at first i was buying happy hardcore & house but as the years progressed i started buying most styles of dance music. i have played at various events including Fantazia/Illusion, The Concept Club, Revive, HeavenzHalo, Encapsulated Energy, Rave Radio, In-ter-dance, Heritage & Unity. i also used to run two pirate radio stations in Stoke On Trent & more recently have played on various internet radio stations including Rave Info, Nu-Perception Radio, Raiders Of The Old Skool/Raiders Radio, Impulse Radio, UR Radio (also head of radio), Rave Radio, Breakage Radio, Desiderium Radio & Asylum Radio. my favorite era in music is 86-99 after then imo it sadly changed musically in the wrong direction, although i do like the odd tune after then & upfront hardcore techno/gabba (& its various sub genres) & makina. i have all sorts in my collection including hardcore, bouncy techno, gabba, techno, jungle/dnb, hip hop/house, house, acid house, trance, old skool, breaks/breakbeat, hard trance, hardstyle, makina, trancecore & freeform etc. my favorite styles that i like to play are house, old skool, 90s happy hardcore & bouncy techno. im an old skool head so i dont like much new music, most of what i play is tunes that i grew up with & im still buying vinyl mostly tunes i missed out on the first time round. for bookings: raindancerob.com@gmail.com
Private Message

DJ-Raindance-Rob is Following - 29 See all

Hi Rob, just adding the peeps i got on facebook mate

ha.. I was just about to say the same thing as Brooksie.. then read his comment. but yeah, you're everywhere, since I started raving I've been seeing 'randance-rob' .. and now here!

yo its raindance rob :-0 your everywhere on the internet if its the same raindance rob -i had a load of downloads of yours in the past -Nice one Fellow Hardcore Dj :-)