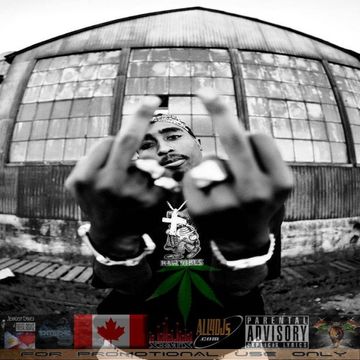 2PAC or Tupac Amaru Shakur (/ˈtuːpɑːk ʃəˈkʊər/ too-pahk shə-koor; born Lesane Parish Crooks; June 16, 1971 – September 13, 1996), also known by his stage names 2Pac, Makaveli and Pac, was an American rapper, record producer, actor, activist and poet. As of 2007, Shakur has sold over 75 million records worldwide. His double disc albums All Eyez on Me and his Greatest Hits are among the best-selling albums in the United States. He has been listed and ranked as one of the greatest artists of all time by many publications, including Rolling Stone, which ranked him 86th on its list of The 100 Greatest Artists of All Time. He is consistently ranked as one of the greatest and most influential rappers of all time. On April 7, 2017, Shakur was inducted into the Rock and Roll Hall of Fame.

This is awesome, there were tracks of 2PAC i've never heard, good one bro....

you're most welcome seyi241 if you want more of this One Love Series they can all be found on: (listen only) mixcloud.com/x3mix or (download/listen) mixcrate.com/djsounds

Wishing you all a safe and happy holidays (Christmas & New Year) enjoy and experience the sounds. We are also on https://hearthis.at/x3mix/ --if you wish to hear more of our sounds