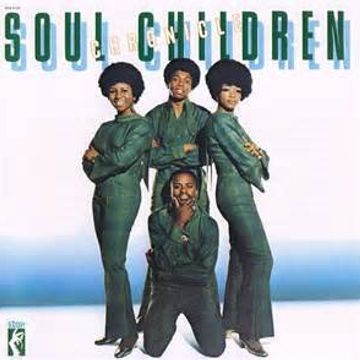 The group was formed in 1968 by Isaac Hayes and David Porter of Stax Records in Memphis, Tennessee, after one of the label’s top acts, Sam & Dave, left Stax to join the Atlantic label. As leading songwriters and producers for the label, Hayes and Porter put together a vocal group with two male and two female singers, all of whom sang lead on some of the group’s recordings. The original members were Norman West, John Colbert (aka J. Blackfoot), Anita Louis, and Shelbra Bennett. Colbert – who had been known from childhood as Blackfoot for his habit of walking barefoot on the tarred sidewalks of Memphis during the hot summers – had recorded solo singles before joining The Bar-Kays as lead singer, after four original band members were killed with Otis Redding in a plane crash. Anita Louis was a backing singer on some of the records produced by Hayes and Porter. Shelbra Bennett had recently joined the label as a singer. Norman West, Jr., the last to join the group, grew up in Louisiana, and sang in church with his brothers Joe, James, and Robert. He replaced William Bell as a member of The Del-Rios in 1962, later recorded several unsuccessful solo singles in Memphis, and sang with a rock band, Colors Incorporated, which had been formed by members of Jerry Lee Lewis’ band.
The group’s first record, “Give ‘Em Love”, produced by Hayes and Porter and released in late 1968, was a Bilboard R&B chart hit, as were two follow-ups. Their fourth single, “The Sweeter He Is”, became one of their biggest hits, reaching no. 7 on the R&B chart in late 1969 and no. 52 on the Hot 100. The group also released their first album, Soul Children, in 1969. Musicians used on the recordings included Booker T. Jones, Steve Cropper, Donald “Duck” Dunn and Al Jackson, Jr., of Booker T. & the M.G.’s, as well as Hayes. However, after the group had a minor hit with a slowed-down version of “Hold On, I’m Coming” in early 1970, Hayes left the project to develop his solo career. The group recorded a second album, Best of Two Worlds, at Muscle Shoals Sound Studios, but their next few singles failed to make the charts. In 1972, they recorded another album, Genesis, arranged by Dale Warren and produced by Jim Stewart and Al Jackson, which produced another hit single, “Hearsay”. Written by West and Colbert, it reached no. 5 on the R&B chart and no. 44 on the US pop chart. They appeared at the Wattstax concert in August 1972, and followed up with several smaller hit singles. In 1973, they recorded the ballad “I’ll Be the Other Woman”, written and produced by Homer Banks and Carl Hampton, and with lead vocals by Shelbra Bennett, which became their biggest hit, reaching no. 3 on the R&B chart and no. 36 on the pop chart. They also recorded a final album for Stax with Banks and Hampton, Friction.
The Soul Children left Stax in 1975, and Bennett left for a solo career. The trio of West, Colbert and Louis signed to Epic Records in 1976, releasing an album, Finders Keepers and several moderately successful singles. Their second album for Epic, Where Is Your Woman Tonight (1977), reunited the group with producer David Porter. Porter then signed the group to a reactivated Stax label established by Fantasy Records, and co-produced another album for the group, Open Door Policy (1978). However, it was less successful than their earlier recordings, and the group decided to split up in 1979.

After the group split up, Anita Louis left the music business and later worked for Federal Express, Time-Warner, and as a professional business trainer. Norman West continued working in night clubs and as a gospel singer and musician. J. Blackfoot became a successful solo singer; his biggest hit was “Taxi” in early 1984, which reached no. 4 on the R&B chart. Shelbra Bennett recorded several singles as Shelbra Deane in the late 1970s and early 1980s; her biggest solo success was “Don’t Touch Me” (no. 50 R&B, 1977).
In 2007, West and Blackfoot decided to reform the Soul Children, adding two new singers, Ann Hines and Cassandra Graham. They recorded an album, Still Standing for JEA Right Now Records. West released a single in 2008 called “Long Ride Home.”