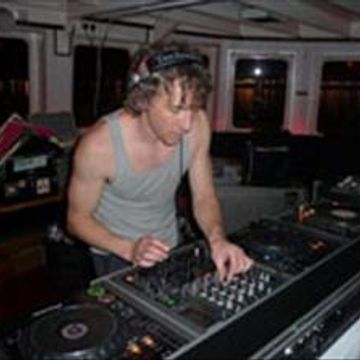 Numark NS6 / Technics 1210's / Numark DM109 & Pioneer 800 mixer Allsorts :) http://www.nicksheldon.co.uk It all started off with my fascination for my dads records. I used to love playing the vinyl on his Pioneer deck, through his (then expensive) celestion Ditton 15 speakers which were powered by a luxman amp, which all added up to a very well rounded sound. I ALWAYS wanted a pair of decks that were in Argos....I never got them. My first record I owned I won at Stockton Brook bonfire. It was a Wings album, I played it to death. The first records I ever bought were two 7" Pretenders - 2000 miles and, Michael Jackson - Thriller. I used to buy all the Electro's on tape. Anyway, I loved hip hop, and every week I was up Roxy Roller Rink in Hanley, (most/all of you will know this venue by a different name now..The VOID..lol) doing my breaking thang. The turtle was my speciality. After we came out of there, we would go to the little indoor shopping arcade which housed the shop 'Fantasy World', and lay out the lino, turn up the ghettoblaster, and dance until they paid us to f**k off ;-) My first 'gigs' (in the broadest sense) were at 6th Form College Fenton, where I used to play tapes in the common room, that I'd mixed with the ghettoblaster (pause sampling). My first proper gig was at Staffs Polytechnic where I set up a couple of nights with my mate Andy (He now works as a voiceover guy for Channel 4). You can see from my past gigs that I played with some big groups. From there I then played at Evegreens 'interesting story'. I used to hang out with Daz Willot, and he was playing at Evergreens, and I used to help him on the nights sometimes. One night he was playing at another gig somewhere, so he asked me to play the night for him. I did, and it went down so well, that the owner told me he wanted me to do the nights instead, to which I replied 'I don't think so, this is my mates night', and I left. Week after, Daz and I turned up, and the told Daz they didn't want him anymore. Daz said he wasn't bothered as he had another weekly gig lined up anyway, and told me to take over the night (apparently Daz and the owner hadn't seen eye to eye for a while). The night was a great success, and got really packed every Wednesday night. From there I left and went to Minstrels. Well, his place was soon empty, as everyone followed me up to Mintrels. Minstrels was a superb place, small, and brand new, great decor. It was the perfect venue.....and that's where it REALLY started, the rest as they say is history. Past Residencies/ Past Guest Spots: RELEA53 http://relea53.co.uk The Barnhouse Project Give The DJ A Break Headless - Resident 6towns Radio Retro Trax OLDSKOOL Festival (MAY 12th - 13th 2012 @ Bath Racecourse) - Promoter FASHIONTV for the opening of the Breeze Bar in Vale Do Lobo Portugal. (http://www.youtube.com/watch?v=QBH25L3BkRc) MIx: http://www.mixcloud.com/nicksheldon/fashiontv-nick-sheldon-breeze-200811-live/ Retro Trax Charity Event with Marshall Jefferson & Ce Ce Rogers @ o2 Liverpool ANTHEMIA http://anthemia.co.uk www.oldskoolanthemz.com Radio West Fest 'Headlined 2007 & 2008 Westwood College WoodFunk 2007 - 2008 The Wigwam and Field Ace of Clubs - THE Promoter / Resident 1998-2002 Chicos / The Club / Time & Space / Void - Hanley / Newcastle Electric Circus - InterNational TV (CANADA) 1996-97 Much Music - LIVE on air - Toronto Energy 108 - National Radio (CANADA) 1996-97 British Dance Scene / DJing - 2 nights a week - LIVE on air - Toronto Together - Resident / Promoter 1996-97 Freedom / Emerald city / Joker / Circus - Toronto Shoom - Pure 1996-97 Velvet Underground / Limelight - Toronto Platinum - Resident 1995-96 Academy - Stoke on Trent Hip 1995 The Koog - Amsterdam Cheeka Boom 1995 Hectors House - Brighton Boyz cum on strong 1995 Hectors House - Brighton Golden Academy - Stoke on Trent New dawn 1993-94 The Gallery - Stoke on Trent Signal radio 1993-94 ( New Dawn ) - Stoke on Trent Radio Stoke 1992-94 Mix FM - Stoke on Trent Delirious 1993 The Dial - Derby